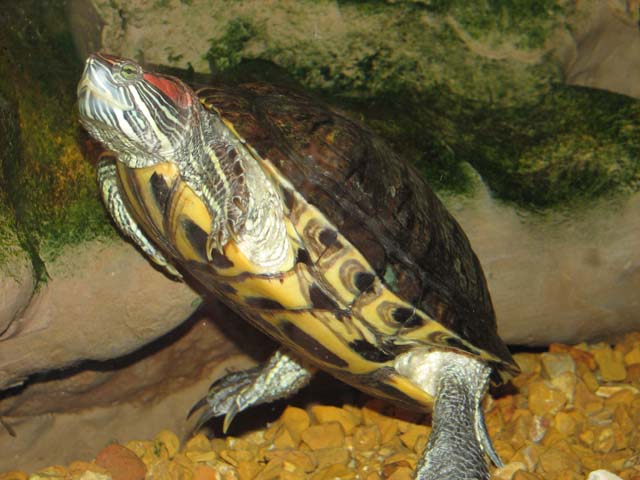 This is one of the most common turtles in the American pet trade and as such is often abandoned or put into the wild damaging itself or the ecosystem....The Red Eared Slider has a large natural range, but less so than common snappers & stinkpots. They naturally range from from the south-central to south-eastern U.S. Per Peterson's Field Guide range map (Page 177)3 they range from ~ the eastern 2/3'rds of Texas to the west, up through Oklahoma & part of Kansas through most of Illinois & part of Indiana to the North, then swings back down southward, leaving the East Coast states mostly 'RES-free' although the Yellow-bellied slider ranges from northern Florida over half-way up the East Coast & across part of Georgia & Alabama (in Alabama RES & YBS ranges overlap a great deal). RES extend south to the coast.

Red-eared Sliders are hardy & encounter a range of temperate climates across their range, making them excellent specimens for a year-round outside enclosure (if it's deep enough) in most of the southern & central United States & other countries with comparable climate. Since local populations over long time periods may be shaped via natural selection to their local environment, in theory RES descended from populations in the southern part of their range (i.e. Louisiana) may not be well-adapted for winters in the northern part of their range (i.e. northern Illinois). Be mindful of this if outdoor hibernation in the northern U.S. is planned. If you need a similar turtle for year round outdoor keeping further north, consider the Western, Eastern & Midland (but not Southern) Painted Turtles

Throughout their lives, Red-eared Sliders are omnivores progressing from predominant carnivory as juveniles to predominant herbivory as adults. That said, even adults prefer meaty foods when carnivorous & herbivorous fare are offered simultaneously. Their raw drive to gorge on higher protein foods makes it easy for keepers to feed too much protein (causing very rapid growth & a pyramided shell, & suspected to cause liver & kidney damage & shorten life span). Keep a check on the turtle's diet and ensure it gets a low-volume well-rounded diet. There are many foods they eat: Mazuri and ReptoMin, Reptile/Pond 10, Cichlid Sticks, feeder fish, feeder crickets, earthworms, krill, blood worms, occasional crayfish & ghost shrimp, aquatic plants (such as Water Lilies, Water Hyacinth, Duckweed, Anacharis, Water Lettuce, Water Fern, Pondweed, Water starwort, Hornwort, Water milfoil, and Frogbit), some vegetables (such as Zucchini, Squash, Collard Greens, Beet Leaves, Endive, Romaine, Red Leaf Lettuce, Kale, Escarole, Mustard Greens & Dandelions) and some fruits (i.e. Banana). Many keepers use a good brand name commercial diet (usually Mazuri or ReptoMin Aquatic Turtle Diets) for a substantial portion (say, 25 - 80%) of the carnivorous portion of the diet, & round that out with treats of crickets, earth worms, crayfish, ghost shrimp & krill, & use Romaine lettuce (chosen over iceberg for higher fiber) & Anacharis as mainstays for the herbivorous portion of the diet. Since wild RES likely don't encounter fruits often we don't recommend use of Bananas & other fruits except as rare treats. Some people offer hairless mouse pups to turtles on occasion; never feed hairy animals to animals who don't naturally eat them (like RES) since hair is poorly digestible & can form trichobezoars (hairballs) & cause G.I. obstruction in some animals (so in theory perhaps RES).

One critical point: if you keep your turtle indoors & don't provide UV-B lighting (i.e.: a ReptiSun 5.0 or 10.0 fluorescent bulb), be sure you provide adequate dietary Vitamin D3. This involves either using a commercial pellet food that includes it, or a powdered supplement like Rep-Cal for feeder insects. Beware using large amounts of food containing Retinol, a form of Vitamin A that (unlike β-Carotene) can interfere with Vit. D3 absorption in the body. UV-B doesn't penetrate glass well so sunlight coming through a window won't do.

Another critical point: you must provide adequate dietary calcium. The ratio of calcium to phosphorous (preferably 2 or more to 1) is important. Typical feeder insects have a poor calcium to phosphorous ratio, meal worms have a terrible ratio, & it's thought by some advanced keepers calcium-containing 'gut load' feeds may not add enough calcium to feeder crickets.

We've a nice research base of wild Slider dietary intake to inform captive care. Sliders are opportunistic omnivores with a wide variety of habitats. Initially predominantly carnivorous but progressively herbivorous as they mature.  Turtles of the United States and Canada1 cites research6,14,15 showing they start out strongly carnivorous which continues into the second year but drops during the first year of growth14; it’s thought the juvenile diet is calcium-rich & may aid shell-hardening14. It's been suggested high-protein = fast growth & increased resistance to predation based on size. The percent animal material in the gut (dry weight) drops to between 0 & 10% at a plastron length around 4 – 6 cm1 (Page 313). Louisiana juveniles start out largely eating insects (mostly hemipterans and dragonfly nymphs) but gradually shift to plants15, paralleling a move from foraging in shallow to deeper water. However, adults still prefer animal material when available14. Note: the Red-eared Slider is currently classified as genus Trachemys, species scripta, subspecies elegans, so Trachemys scripta elegans. In the past sliders were classified as genus Pseudemys, which includes the cooters. Researchers often don't discriminate at the subspecies level, so some slider research was done on Yellow-bellied Sliders (which we assume to be identical to RES excepting cosmetic distinctions).

For the first 6 months of life, feed commercial pellets and/or other 'meaty' foods (such as earthworms, crickets or fish) once daily, enough to diminish appetite but not gorge the turtle. After 6 months, switch to every other day feeding. Romaine lettuce & other leafy greens may be offered daily for graze at will. Over time adjust diet content & schedule accounting for growth, activity level & appetite. Overfeeding high-protein foods causes rapid growth, shell deformities (pyramiding) & is believed harmful to the liver & kidneys. If the carapace scutes develop a prominent concentric ring pattern &/or thicken, making the carapace bumpy, cut back strongly on protein in the diet or your turtle will have a permanently pyramided shell. While growth rate varies amongst different hatchlings, at 1 year of age we want to see an SCL of 2 to 3.5". At all ages recommendations on the amount of meaty food to offer vary; some suggest enough to fill the head back to the rear of the red patches if it were hollow, others let the turtles gorge but only feed twice per week, & some simply feed enough to slake appetite a bit. For a 50 cent piece-sized hatchling, 1 or at most 2 regular ReptoMin pellets per day are sufficient.

Red-eared Sliders are avid baskers, so a basking platform  with a heat lamp to maintain daytime temp.s around 85-90°F is needed (platform should dry completely for plastron health). Note: Small enclosures (i.e.: 10 to 20 gallon tanks) are easily overheated by basking bulbs, so monitor temp.s closely. We recommend also using UV-B lighting since UV-B provides the means to convert a precursor to Vitamin D3 in the skin, used to process calcium (& lets them auto-regulate Vit. D3 levels, which dietary Vit. D3 doesn't enable), & recommend ReptiSun 5.0 or 10.0 tube fluorescents for the beginner. A submersible heater is recommended to keep water temp.s in the proper range (turtles are rough & at risk to get burned; use a Tronic heater guard or a home-made version on glass heaters, or a steel heater to prevent breakage). Note: Always unplug the heater before lowering the water level; they get dangerously hot very fast in air. Red-eared Sliders are excellent swimmers and should have water as deep as possible without permitting escape (at least equal to SCL). Aquatic substrates are optional, ranging from a bare bottom (easiest to clean during water changes) to sand, river rock or any size gravel. There are reports of rare cases of G.I. obstruction or intestinal prolapse due to ingesting gravel, so some keepers use River Rock too large to swallow. We recommend you provide submerged driftwood or other means for the turtle to rest near the surface, especially juveniles. It's hotly debated whether leaving the tank lights on 24/7 is problematic vs. turning them off at night. Some other animals have internal circadian rhythms influenced by 'photo-period' (day length), & in nature they experience day & night, so we recommend using a timer for a consistent day/night cycle with 'lights on' ~ 12 hours/day (the convenience of a timer will surprise you). Aquatic turtles excrete nitrogen-containing wastes including ammonia, & a powerful filter is needed to convert ammonia to nitrite to nitrate (called 'biofiltration,' which isn't in effect until the filter 'cycles' over ~ 4 to 6 weeks. Add some old biomedia from an established filter to your new one to speed the process). The impact of ammonia & nitrite on turtles aren't yet clear but they can kill fish so we recommend a filter rated for at least double the enclosure size (i.e.: a FilStar XP3 rated for a 175 gallon tank does well on a 75 gallon) to ensure rapid breakdown. Nitrates & other dissolved wastes are kept dilute via water changes; you've got a lot of choice here. A 25% water change weekly in a sparsely populated tank may be okay. A large (50 - 90%) water change every 2 to 3 weeks using a Python system to gravel vacuum, remove old water & replace with new is easier - the sudden shift in water temp. & pH shouldn't hurt the turtle but may kill delicate fish. We've had reports of turtles acting like chlorine irritated their eyes, & chlorine could damage your filter's beneficial biomedia bacteria, so we recommend you use a dechlorinator (that also handles chloramines, since they're much more stable over time & some cities are switching to them).

If you have any questions that were not answered on this page, please visit the "Contact Us" tab and ask away! We are here to help.