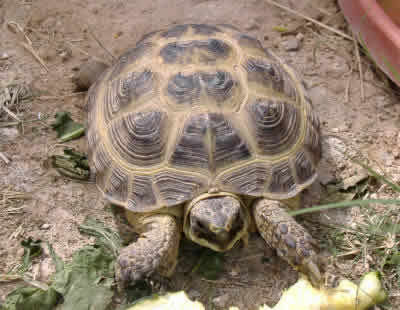 Russian tortoises are herbivores that graze on a variety of weeds, including leaves, flowers, and stalks.  Their natural diet is high in fiber, high in calcium, and low in protein.  The protein they do eat is all from plants; none is from animal sources.  A Russian’s natural diet also does not include fruit, which contains high amounts of sugar that can cause bloating and parasite blooms.

Generally harsh and arid landscapes ranging from sandy steppes to rocky and hilly topography, sometimes found at elevations above 5000 feet.

Whenever possible, an outdoor habitat is best for a Russian tortoise.  The habitat should be secure from predators, including raccoons, cats, dogs, possums, and humans.  Russians are excellent climbers and diggers so the pen must be escape proof!  There should be a variety of shrubs, weeds, and wildflowers in the pen for food and shelter.  Water should be available at all times for soaking and drinking if the tortoise chooses to do so.

Outdoors:  An outdoor enclosure is best, at least during the warm months, and approximately 4 ft. by 4 ft. would be a suitable minimum size for an adult.  These are very active and curious tortoises, so bigger is always better for an enclosure.  Because Russian tortoises are good climbers and diggers, the base of the pen should extend 8-12 inches below the ground surface using wood, heavy-duty chicken wire or hardware cloth, or cinder blocks.  The walls of the pen should be at least 12 inches high and should be made of wood or something else that does not give the turtle a good surface for climbing.  Making rounded joints instead of square corners will discourage escape attempts so common in corners.  To further discourage escapes, adding a wooden lip that faces inward along the entire top edge of the pen is good insurance.  If you suspect that predators, including humans, could be a problem, make a locking screen top for the pen.  If your pen is large, the top can be made in sections to make it easier to open and close. It is important to choose a location offering a combination of sunny and shady areas throughout the day.  Russians are sensitive to dampness so the soil in the pen should have good drainage.  Dirt mounds, rocks, logs, plants, and other “furniture” make the pen more interesting and also break up the line-of-sight, which makes a pen seem larger to the tortoise.  If he can't see across to the other side of the pen, he'll be less likely to try to escape.  Rocks, logs, and terracotta plant pots also provide hiding places and shelter from sun, rain, and other elements.

Plant the pen with a variety of grasses, wildflowers, and shrubs.  Using pesticide-free, edible plants provides a more natural setting for the tortoise and also provides a more suitable diet during those months when it’s possible to grow plants outdoors.  Depending on where you live, there are many plants to choose from.  A short list of suitable ones includes hibiscus, dandelion, sedum, mallow, hosta, fruitless mulberry, prickly pear cactus, California poppy, roses, ice plant, plantago (plantain—the weed not the banana-type plant), and forsythia.

Although Russians are from an arid climate and ambient humidity is quite low, they dig long burrows in which the humidity often reaches 70%.  Always provide a water dish with fresh water so your Russian can rehydrate when necessary.

If your soil isn't deep enough for your Russian tortoise to burrow in, you can supplement it with organic top soil, regular dirt from your yard (not treated with pesticide or fertilizer), peat moss, or cypress mulch.  Do Not use anything with cedar or pine, however, as these aromatic woods can cause respiratory problems.

Indoors:  If your Russian tortoise needs to live indoors, the enclosure should be as large as possible.  I wouldn't use anything smaller than a 50-gallon Rubbermaid plastic tub for an adult so that you can provide the microenvironments your tortoise needs.  In addition to plastic tubs, other possible indoor enclosures include a wooden tortoise table (like an upside down bookcase) that is sealed with waterproof polyurethane, or a reptarium, which is a fully enclosed mesh and PVC structure.  At first glance, a reptarium does not look entirely suitable for a tortoise because they can see out, which can cause stress.  Often, if they can see out, they want to get out.  I use reptariums for several tortoises including Russians and they work very well for my tortoises.  They’re large, airy, and very light weight.  You can buy a plastic liner for the bottom to hold the substrate.

There are a variety of substrates you can use indoors.  The substrate should be several inches deep and should not be something that will trap moisture.  My preference is a mix of approximately 60% top soil and 40% play sand.  You can also use bed-a-beast instead of top soil with the play sand.  Some keepers prefer cypress mulch or orchid bark mulch.  Piles of Bermuda, orchard, or timothy hays on top of the substrate provide additional burrowing areas and many tortoises will eat it (it’s good for them!).  Although the substrate should not be bone dry, you don’t want to use something that is going to hold water and turn moldy or remain muddy and damp.  Alfalfa pellets are not recommended because they are high in protein (tortoises will eat the pellets), hold water, and mold easily.  Substrates made with pine or cedar are not recommended either because the fumes are an irritant that can cause serious respiratory difficulties.

You'll need to supply lighting and heat indoors.  Turtles need UVA and UVB light.  Fluorescent tubes such as the Reptisun 5.0 provide UVA & B; ceramic heat emitters provide heat; mercury vapor bulbs supply both UVA/B and heat.  The basking end of the tub should be about 95 degrees, while the cooler end should be in the low 70s.  At night, the temperature can be in the 60s.  Provide the same types of hides, water dish, and interesting “furniture” indoors that you do outdoors.  With the smaller space and intensity of the basking light, there is a greater danger of dehydration indoors so in addition to fresh water being available at all times, it is a good idea to soak your tortoise in lukewarm water twice a week for about 20 minutes.

Russian tortoises come from a harsh environment and are active for just a few months during the year.  They come out of hibernation, and their bodies are genetically programmed to eat as much as they can until it’s time for very hot weather, during which Russians aestivate.  It is very easy to overfeed a captive Russian, especially when housed indoors.  In captivity, they’re awake for much longer periods and tend to get less exercise than in the wild.  The best diet is a natural one that allows the tortoise to graze on various weeds and wildflowers.  Outdoors during warm weather, you should try to grow plants such as dandelion, bindweed, opuntia cactus, sedum, ice plant, plantains (the weed, not the banana-like fruit known as plantain), coreopsis, hibiscus, hosta, pansy, petunia, mulberry (the leaves, not the fruit), California poppy, mallow, honeysuckle, some vetches, some clovers, Bermuda grass.  It is also possible to grow many wildflowers and weeds indoors and in greenhouses so that your tortoise does not have to rely on grocery store greens, especially in winter.  Anything the tortoise might graze on must be pesticide free.

If fed grocery store produce, it should be mixed into a salad and may include endive, escarole, dandelion greens, watercress, frisee, red-leaf lettuce, radicchio, shredded carrot, turnip greens (small amounts), collards (small amounts), opuntia, romaine (small amounts), and occasional pumpkin or butternut squash.  The mixed salad diet is low in fiber so it is helpful to sprinkle with Bermuda grass hay that has been ground to a powder (a coffee grinder works well).  Dust the food with calcium daily, and if the tortoise isn't kept outdoors in natural sunlight, also use a combination calcium-D3 product a couple of times a week.  It is also helpful to keep a cuttlebone (with the back removed) in the enclosure so your tortoise can nibble on it if she or he feels the need for more calcium.

It is possible to keep several Russian tortoises together in a large enclosure.  Although individual personalities will differ, it is best to assume that males will be aggressive towards each other and to females, especially during the breeding season.  That’s why space is important, and you also need to have lots of hiding places.  If you’re going to keep males and females together, the females should outnumber the males.